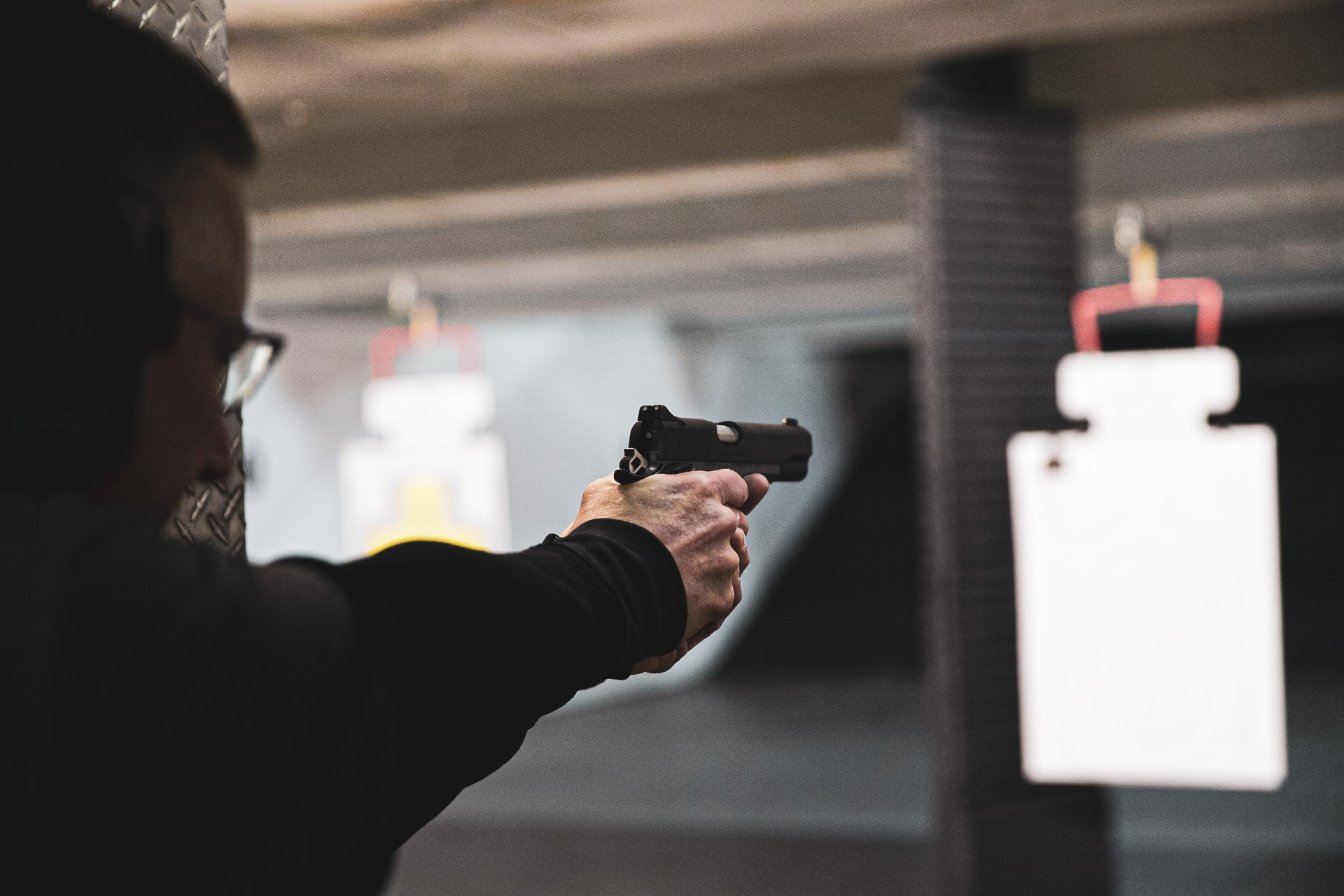 A common joke in the American gun community goes something like this:

A: Because carrying a cop is too heavy.

This humorous quip should not detract from the fact that many individuals in the United States (including me) own and carry a firearm for purely pragmatic reasons. The simplest case for the right to keep and bear arms can be summarized in one sentence: You are ultimately responsible for your own safety and security.

This sobering pill can be difficult for many people to swallow but that's reality. Evil exists in this world. Under the right circumstances, people can and will do unspeakable things to each other as any student of history or psychology will know. Those fortunate to live in gated communities and can afford armed security are often oblivious that most other people do not enjoy the same luxuries.

Many violent crimes take place and are over in a matter of seconds (and stopped in seconds that prevent the worst). As another popular saying goes, "When seconds count, the police are only minutes away." In the United States, depending where you live, police response time ranges from nine minutes to over an hour. Right now, one in five New York police officers are currently out sick due to COVID-19. Police in multiple states have announced they will no longer respond to theft, burglary, and break-ins. Given the current climate, it's not unreasonable to assume police will take much longer to arrive, if they do at all, should someone dial 911.

Furthermore, Americans need to understand there is no legal obligation for the police to protect you, which is affirmed by the Supreme Court and multiple lower courts. (See Castle Rock v. Gonzales, Warren v. District of Columbia, and Lozito v. New York City). Should the police fail to arrive or protect you when needed, you can’t even sue for neglect.

Thus, given the legal and logistical realities, taking the initiative to protect yourself should be as sensible as any other proactive measure such as having a fire extinguisher in the home or jumper cables ready in the back of the car. Should disaster strike, preparedness will make all the difference in the world. Protecting your one and only life deserves no less preparation and investment, especially in our increasingly complex and uncertain world.

Chaos Can, and Will, Strike

Americans are fortunate to live in a country with mostly stable institutions. But there are vivid examples when segments of society break down, many in not-too-distant memory. In widespread civil disturbances such as the 1992 LA riots or the aftermaths of Hurricane Katrina, Florence, and Harvey, the authorities were overwhelmed and unscrupulous individuals took advantage of the chaos to prey on others.

Going by sheer numbers, almost all of us will encounter at least one black swan in our lifetime. The current COVID-19 pandemic and its aftermath are already the most trying times on the lives and livelihoods of Americans since the 9/11 terrorist attacks and the financial crisis of 2008-2009.

Should an even deadlier natural or man-made catastrophe take place, if the authorities haven’t been incapacitated, displaced, or destroyed completely, whatever personnel and resources are left will be prioritized to protect high-ranking government officials, their inner-circle, and critical government facilities and infrastructure.

The economist Thomas Sowell reminds us, “The first lesson of economics is scarcity: there is never enough of anything to fully satisfy all those who want it.” Security also happens to be a scarce resource. There’s simply not enough boots on the ground that can guarantee all 300 million Americans will be protected at all times from all threats. In every emergency, tough decisions will have to be made. From what we know about past and present “continuity of government” plans, ruling elites will be evacuated to a secure bunker in some undisclosed location while John Q. Public will be left to fend for himself.

Every American schoolchild is taught that everyone is equal before the law. Given this fundamental axiom, it’s not unfair to demand that the average American citizen have access to the same means of security and protection that government officials—who are our servants, not overlords—insist on having for themselves (while using taxpayer money). Under the American political system, the right of self-defense cannot be limited to only a privileged few. No one, regardless of their socioeconomic status, can deny fundamental rights to others.

The state of war is a state of enmity and destruction: and therefore declaring by word or action, not a passionate and hasty, but a sedate settled design upon another man’s life, puts him in a state of war with him against whom he has declared such an intention, and so has exposed his life to the other’s power to be taken away by him, or any one that joins with him in his defence, and espouses his quarrel; it being reasonable and just, I should have a right to destroy that which threatens me with destruction: for, by the fundamental law of nature, man being to be preserved as much as possible, when all cannot be preserved, the safety of the innocent is to be preferred: and one may destroy a man who makes war upon him, or has discovered an enmity to his being, for the same reason that he may kill a wolf or a lion; because such men are not under the ties of the common-law of reason, have no other rule, but that of force and violence, and so may be treated as beasts of prey, those dangerous and noxious creatures, that will be sure to destroy him whenever he falls into their power.

The political philosophy of John Locke and other Enlightenment thinkers contributed a unique element to American political theory: Fundamental rights do not come from the government. Human beings possess them already simply by virtue of being free and that includes a pre-existing, natural right of self-defense and self-preservation. As the Declaration of Independence memorably emphasizes, these natural rights are “unalienable” which means they cannot be taken or given away. They are permanent and apply in all times and all places to all human beings, with or without the Second Amendment or any other statutory pronouncement.

“Self-evident truths” and similar conclusions are found in other schools of thought. The ethical intuitionist philosopher Michael Huemer also highlights an interlocking relationship between the right of self-defense and the right to own a gun:

Even without the existence of absolute rights (which Huemer declines to acknowledge for guns or any other right), he nevertheless persuasively argues:

Using a memorable thought experiment, Huemer shows how gun control laws that prevent a person from accessing or exercising the means of self-defense is akin to a criminal accomplice who holds a victim down while the actual murderer carries out the foul deed. By preventing the victim from escaping or exercising his right to self-defense, the accomplice’s action is still “if not equivalent to murder, something close to murder in degree of wrongness, even though he neither kills nor injures the victim.” In a follow-up thought experiment, Huemer adds:

...except that the victim has a gun by the bed, which he would, if able, use to defend himself from the killer. As the killer enters the bedroom, the victim reaches for the gun. The accomplice grabs the gun and runs away, with the result that the killer then stabs his victim to death.

Most reasonable individuals will intuitively recognize what the accomplice did was morally wrong. In both scenarios, the accomplice’s actions purposely prevented the victim from defending himself. If gun control laws have the same effect, it logically follows that they are “about equally serious as a violation of the right of self-defense.”

Other Forms of Self-Defense

Fortunately for Americans, most of us still have access to a wide range of choices when it comes to self-defense. While it is understandable to be reluctant to pick up a gun, it is worth mentioning alternatives such as martial arts, tasers, and pepper spray are often severely limited by range, efficiency, or effectiveness.

Even if she is proficient in martial arts (which requires years of training), a 5-foot, 100-pound woman will be overwhelmed if she faces multiple attackers who weigh twice as much. On the other hand, she can ably defend herself with an AR-15 semiautomatic rifle, which is a popular weapon for many Americans, including women, because of its light weight, low recoil, accuracy, reliability, ergonomics, and ease of customization to fit any shooter regardless of size and stature.

Compared to other options, firearms are the most practical and effective way for the average American to secure his or her life, liberty, and property. As I emphasized in a previous essay:

From the colonists winning independence from Great Britain to African-Americans vindicating their civil rights, the role of the gun is inseparable from American identity. The gun is the ultimate multipurpose tool that empowers its user with the means to put food on the table, as well as preserve one’s life, whether against common street criminals or government tyranny.

In these uncertain times, both the pragmatic and philosophical case for gun rights are as strong as ever.

Many Americans, especially minorities, have realized the need for self-protection in times of social upheaval and breakdown. It is unfortunate that it took a tragedy as extreme as the COVID-19 pandemic to remind people that we should never take peace, prosperity, and freedom for granted. But millions have now taken the first steps to defend themselves and their loved ones. They should know they are in good company.

From what I’ve witnessed firsthand and experienced to date, the American gun community is strongly supportive and always welcoming towards first-time gun owners and anyone remotely curious about firearms regardless of their background. (See our plethora of welcome and orientation videos for newcomers brought in by the recent gun-buying surge). Our country’s gun culture and people's civic virtue reinforce each other. In the spirit of Tocqueville, civil society has stepped up in the COVID-19 pandemic and demonstrated exemplary acts of charity. It’s only natural that the gun community is also actively participating by sharing knowledge with their fellow Americans and ensuring new gun owners are comfortably onboarded.

I am confident these new gun owners will learn how to handle their weapons responsibly, discover the joys of shooting, and become future staunch defenders of the Second Amendment (and hopefully the rest of the Bill of Rights as well). Our past is full of inspiring examples of Americans emerging stronger and freer after overcoming crises that tear the fabric of society and test our ideals. In these “times that try men’s souls,” let us not forget the precious legacy bequeathed to us.