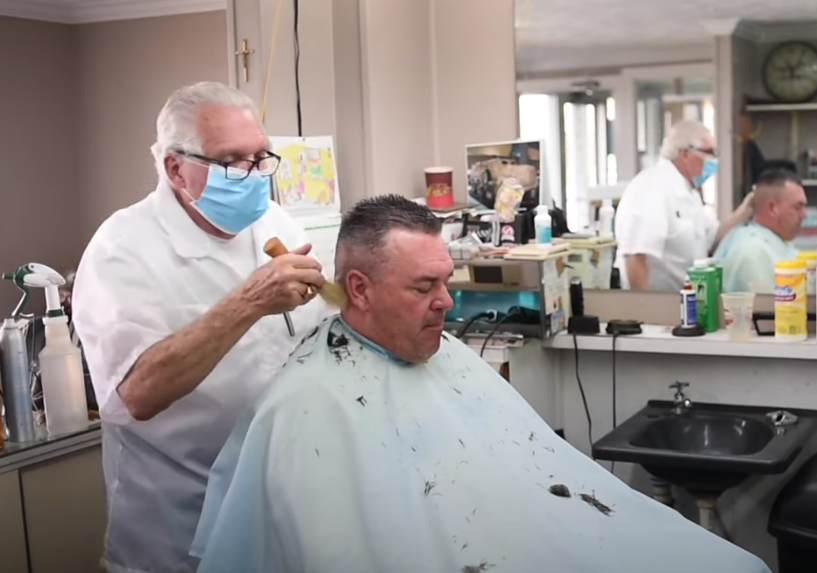 Karl Manke has been cutting hair since 1961. In March, he closed his Owosso barbershop, located about 40 miles northeast of Lansing, when Gov. Gretchen Whitmer ordered a statewide lockdown closing all “non-essential” businesses.

When Whitmer extended that order to May 28, Manke decided he could not comply and opened anyway.

“I had no income,” said Manke, who wears a protective mask while cutting patrons’ hair.

The 77-year-old barber was cited twice and had his licence revoked. But this week a judge refused a request from the Michigan Attorney General's Office to shut down Manke’s barbershop.

In his classic work The Spirit of Laws, Charles-Louis de Secondat, Baron de La Brède et de Montesquieu (better known simply as Montesquieu) explained why it is necessary to distribute power in any governing system.

“When the legislative and executive powers are united in the same person, or in the same body of magistrates, there can be no liberty,” observed Montesquieu (1689-1755).

Montesquieu’s statement reveals two important things. First, it contains the idea of the separation of powers, which would influence the Founding Fathers and in turn the American system of government. Second, it reveals the only justifiable purpose of government: liberty.

Montesquieu is especially important today as the world grapples with the COVID-19 pandemic, which threatens not just lives but the livelihoods and liberties of millions of Americans like Karl Manke.

To contain the spread of the virus, many states have, like Michigan, instituted sweeping lockdowns that have caused widespread economic destruction. These lockdowns are unprecedented in human history. For centuries if not millennia, quarantines involved isolating sick people and those known to have been exposed to deadly contagion, not healthy people. As a world-leading epidemiologist recently observed, the current lockdown paradigm “has really never been done before.”

The pandemic raises questions. Do civil liberties still apply during epidemics? Are their limits to the powers the executive branch can wield in its effort to contain the spread of a deadly virus? How do we balance individual rights and public health?

These are important questions, yet they have received scant attention for most of the pandemic. The public was largely forced to comply with any and all orders leaders passed in their efforts to contain the virus. Though protests erupted around the world against the lockdowns—India, Germany, Brazil, etc—Americans who’ve organized against them have been described as “domestic terrorists” and “conspiracy theorists.”

These accusations overlook the vast encroachments of civil liberties witnessed in recent months by governments.

As the Constitution Center explains, many orders violated America’s most cherished civil liberties—the freedom to assemble, the right to purchase a firearm, the ability to freely travel, the freedom to attend church. Thousands of businesses were put on a path toward bankruptcy, since their owners and workers were prohibited from earning a living by engaging in commerce.

As Manke’s case shows, however, courts have begun to push back on the largely unchecked power of state governments, which have “police powers” under the Constitution.

Days before the court’s ruling on Manke, an Ohio judge ruled that the state’s lockdown is illegal.

"The [public health] director has quarantined the entire people of the state of Ohio, for much more than 14 days. The director has no statutory authority to close all businesses, including the plaintiffs' gyms, which she deems non-essential for a period of two months. She has acted in an impermissibly arbitrary, unreasonable, and oppressive manner and without any procedural safeguards," declared Judge Eugene Lucci in a nine-page ruling.

In Oregon, a county circuit judge overturned Gov. Kate Brown’s “Stay Home, Save Lives” order, saying the governor erred by not seeking legislative approval to extend the lockdown beyond its 28-day limit. That ruling, in turn, was halted this week by the Oregon Supreme Court, pending further review.

These are welcome applications of the "separation of powers" principle that is fundamental to the American system of government. Montesquieu saw such checks as essential so as to prevent power from being exercised in “a tyrannical manner.”

Many might resent any implication that lockdows are “tyrannical,” since they are designed to protect people from a deadly virus. This would ignore the fact that many of history’s most tyrannical regimes—from the Khmer Rouge in Cambodia to Mao and his Great Leap Forward and beyond—had noble ends: a more equitable society.

As the Christian philosopher C.S. Lewis once observed, concentrated power is especially dangerous in the hands of do-gooders.

“Of all the tyrannies, a tyranny sincerely exercised for the good of its victims may be the most oppressive,” Lewis wrote. “It may be better to live under robber barons than under the omnipotent moral busybodies.”

This description comes to mind in light of Manke's trials and other recent events.

We’ve seen a salon owner jailed for engaging in commerce to feed her children, a mother dragged to the ground by five cops for not wearing a mask in public, and nursing homes in numerous states—including New York and Michigan—forced to admit COVID-19-infected residents despite the obvious risks.

Mom placed in handcuffs after altercation with #NYPD & #MTA over not fully wearing her mask in #Brooklyn #NYCSubway station. Police say woman wouldn’t listen, but wasn’t arrested and charged, rather taken out of station. Courtesy: Anthony Davis on FB pic.twitter.com/nohs9NpuGj

These actions, and countless others, remind us that concentrated force is a potent thing, and dangerous.

It was a suspicion of concentrated power that prompted the America’s Founders, influenced by Montesquieu and other thinkers such as John Locke, to create an intricate governing system that dispersed power among multiple bodies (states and a federal government) and various branches—judicial, executive, and legislative.

James Madison, the Father of the Constitution, famously described why such a system was not just wise, but necessary.

Courts demanding that public officials must demonstrate the sweeping actions they are taking are legal and justified, not arbitrary or excessive, are doing precisely what they were designed to do.

Manke deserves credit for his bravery and civil disobedience, but his courage would have been for naught without the intellectual contributions of Montesquieu and Madison.