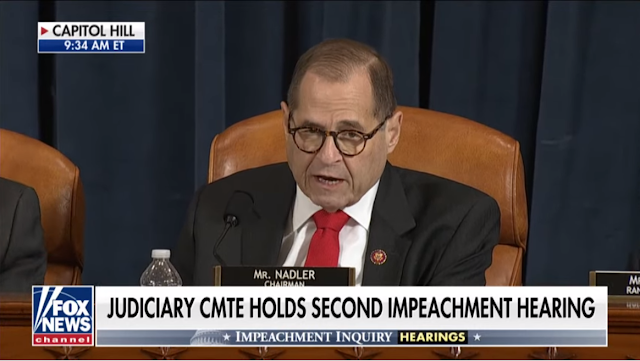 
Jerry Nadler, in his alarmingly Stalin-esque iron fist presiding over the Impeachment Pseudo-Debates, against both the Rules of Order and even the council of the other ranking members present in both parties, shouted down Republicans citing the Rules of Order to him when they asked about scheduling concerns over when the Republicans will get the minority hearing they are legally within their right to ask for and Nadler said during the last hearing would be considered.

In his opening statement, Nadler made multiple references to the Constitution and his "oath" to defend it. He said there was "overwhelming evidence" of President Trump violating the founding document and argued President Trump was a threat to the country. But then, in what could only be described as a blatant disregard for all rules and order, he turned around and broke the Rules of Order while shouting down the minority party as they cited the very rules he broke to him, and denied them their legal right to their own minority trial. This came on the heels of denying most of their Constitutional scholars in the last show trial. If Nadler's actions are not tyranny, if they are not in violation of our Constitution, then what on earth is?

Jerry Nadler is the real tyrant, he is representing a party that is making up hoaxes about a President this country elected. We have two transcripts, the testimony of the Ukrainian President, and the fact not a single witness in Schiff's Show Trials could name a single crime President Trump committed and could not tie the aid to an investigation. We have the fact that Zelenskyy and President Trump did, in fact, meet, Zelenskyy received the military aid, and Zelenskyy said there would never be an investigation.