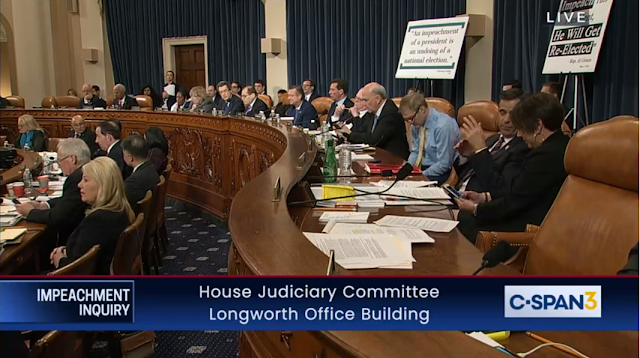 
In a series of questions and answers with lawyer, George Washington University Professor, and legal scholar Jonathan Turley, he categorically rejected Adam Schiff's charges that President Trump committed impeachable offenses on the basis that the terms are not even clearly defined and therefore useless. Even further, Turley argued the call transcripts prove President Trump never asked for a quid pro quo, and that President Trump never withheld aid for any reason at all.


When asked to respond to Democrat statements concerning a recent article he wrote and his current testimony, he stated that, unlike what Democrats tried to paint him as saying, he believes there was no proof of President Trump using his office for personal or political gain. Further, he stated the evidence used by the Democrats in Schiff's impeachment inquiry was not firsthand accounts and that they were ignoring the firsthand witnesses available, like the whistleblower, instead relying on accounts of accounts of the situations.


As the impeachment treasure hunt trudges on, the facts are being fully ignored by Democrats as they try to make hoaxes invented by Adam Schiff stick. Constitutional scholars are debunking Democrat statements and proving there really is nothing to the entire Impeachment Inquiry. Not only do the Constitutional Convention Debates prove "maladministration" is not a cause for impeachment, but the fact the transcript itself and Zelenskyy's own statements prove there was no quid pro quo and that President Trump did not ask for political meddling and was instead investigating corruption is a damnable fact to Democrat impeachment arguments.