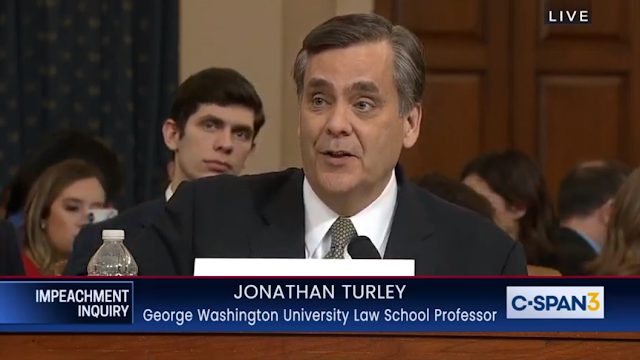 In his argument, he said President Trump had done nothing impeachable and therefore the entire impeachment treasure hunt is unConstitutional. Under questioning from Doug Collins, Turley noted how the Framers of the Constitution considered impeachment as a very important process that should not be sped along, as the House Democrats have been trying to accomplish. He also mentioned, during questioning by Paul Taylor, that the rhetoric surrounding impeachment being focused on whether a person is anti a foreign government interfering in the election effort is a form of censorship and not at the source of the issue, which is whether the President committed bribery, treason, or high crimes and misdemeanors.


Jonathan Turley also said there was no crime committed by President Trump when asked. Instead he said the impeachment treasure hunt was based on hearsay and theories instead of the actual facts of the issue. He also said he thought the evidence given by the Democrats fails to provide any proof of an impeachable offense.

As a preface to the Judicial Pseudo-Debates, Adam Schiff's impeachment report was recently released and is based on a false accusation that President Trump was purposely meddling in the 2020 elections instead of investigating corruption, as the call transcript showed. Further, he repeats the same thoroughly debunked hoax that President Trump "pressured" Zelenskyy for an investigation, something President Zelenskyy strongly rebuffed multiple times.


As the new "inquiry" continues, it is apparent this is just another show trial that is based on false and debunked accusations instead of the actual facts of the case. The fact a successful lawyer and widely-known legal scholar was able to easily debunk the Demcorats' entire impeachment argument shows this is nothing more than a political show trial created to give President Trump negative press coverage heading into 2020.